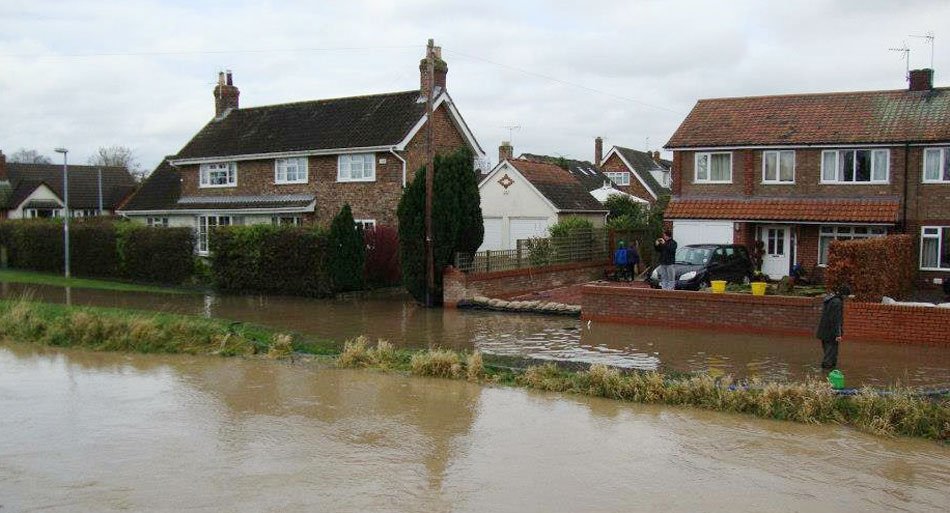 Council staff who worked tirelessly to save more than 50 homes from flooding on Boxing Day have been praised for their actions.

Villagers in Wilberfoss have said a big thank you to seven of East Riding of Yorkshire Council’s grounds maintenance team who spent 16 hours battling to prevent flood water reaching their houses after the village beck burst its banks on the Christmas holiday.

Many of the properties near the beck had already suffered badly from the devastating flooding of 2007, with some residents having to vacate their homes for nearly a year afterwards.

But thanks to the quick work of grounds supervisor Ian Donaldson, grounds coordinator Stewart Lazenby and their team – Gary Fullard, Darren Muldowney, Craig Demolupied, Alan Mcleish and Neil Smith – homes along Beckside and Foss Beck Close were saved from the flood.

Now Wilberfoss Parish Council has publicly praised the team for their hard work and dedication.
Sarah Wills, parish council clerk, said: “On behalf of the community of Wilberfoss we’d like to say a huge thank you to Ian, Stewart and the team.

“Their tireless efforts on Boxing Day saved the village from serious flooding.”

The grounds team were out and about checking flooding hotspots on Boxing Day morning when they were called to Wilberfoss – and they immediately went to the aid of residents.

Between them they delivered almost 500 sandbags – weighing a total of around six tonnes – to protect houses from water inching ever closer.

They then used a council water pump, and travelled to the Goole depot to fetch a second, larger pump, to shift water beyond the road bridge on Main Street to stop the water level getting any higher. The team was at the scene until after 1am.

Cllr Lesley Hoyer, chair of Wilberfoss Parish Council, said: “They did an absolutely excellent job and we couldn’t have asked for better help.

“They gave up their holiday and went out of their way to make sure everyone was safe. We can’t thank them enough.

“The equipment that East Riding of Yorkshire Council has invested in to tackle flooding issues proved invaluable.”

The team, from the Market Weighton, Goole and Carnaby depots, returned to Wilberfoss early the next morning for a 10 hour shift to check on the situation and to collect the pumps.

Ian, who has helped in flood situations many times, said: “We were there 16 hours on Boxing Day, but to save all those properties from flooding I would have stayed there double the length of time.

“When you see the devastation flooding can cause, we knew it was important for us to do everything we could.”

“These guys in yellow and orange jackets and overalls are just one of many incredibly dedicated and hard working teams and they are a credit to the council and the wider community.

“I’m extremely pleased and proud that our staff and equipment were able to provide vital help to the residents of Wilberfoss at a very difficult time.”

The grounds team were back helping at another flooding situation in Bubwith on January 9, which involved them building a wall of sandbags 100 metres long.